Witless Wizards a game from Drawlab Entertainment. This game was funded on Kickstarter in 2018. It’s a fun and quick card game for 2 to 4 players.

I’ve also received the 2 mini-expansions, The Viking Deck and the Druid Deck. Both decks got 8 unique cards. 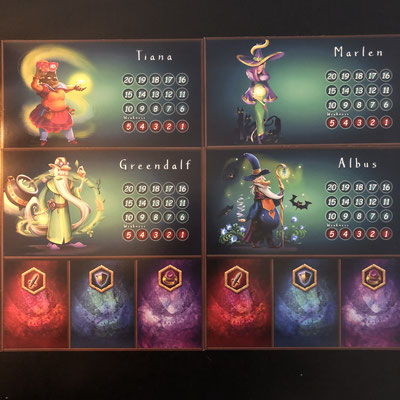 The players choose one of the player boards. They’ve used some nice characters for these player boards, you can play with Albus, Marlen, Tiana or Greendalf.

When everybody got a player board, you start choosing 3 of the 7 available decks; Wizard, Medevieval, Samurai, Druid, Sci-Fi, Pirates, Viking. Note; Viking and Druid are mini expansions, you can add them to your deck. When the 3 decks has been choosen, you can shuffle all the cards together and put them in the middle of the table so everyone can reach the cards.

Then the standard equipment cards are shuffled and every player choses one of the cards and place them on their player board on the offensive, defensive or special equipment slot. At last every player receives 2 Concentration Cubes.

Then the battle starts en the first player rolls the dice and then an attack starts (you can also battle when you don’t got an attack card) and also the ability on the card will modify the Attack. The attack value on the card and the amount on the dice are your total attack power.

If you got 5 or less Stamina, you can return any Concentration cube to heal. But you cannot get higher than 20 Stamina!

When a player reaches 0 Stamina he or she loses, the player that survived all the other players is the winner of this game.


An example of an attack card.

You can see the number next to the sword

how strong your attack can be (4 in this example).


An example of a defense card.

You can see the number next to the shield

how strong your defense is (7 in this example).
But you can also see that you cannot attack with this card.


Witless Wizards is a fun game to bring to the table with 2 players up to 4 players. We’ve really had fun playing this game! It’s a game what you can get on the table soon because it easy to learn and play. We’ve had a lot of fun playing this game, you can really bother your opponents by giving them some bad cards. But watch out, you can also draw a bad card for yourself. You can play this game a lot, because you can choose which decks you start to play with.

Many thanks to Drawlab Entertainment for letting me review Witless Wizards including the 2 mini expansions.