Raccoon Tycoon was successfully funded on Kickstarter in 2018.

Raccoon Tycoon is a great economic game with a lot of ways to win this game. When I first saw this game, I felt in love with the artwork. I really like it how they created all the animals with this look. First of all I want to thank Glenn Drover and Forbidden Games for the opportunity to play this game. I don’t know if everything that I’ve shown is also available in the retail edition.

At Spiel 2018 you could pick up your Kickstarter copy of the game and/or just play it. They’ve got a really big stand and that really impressed me. That was also my first meeting with Glenn Drover, a very inspiring man and has done some great work in this community (if I may call it like that). Raccoon Tycoon is now available in stores right now, but for the Dutchies I don’t know if the stores in The Netherlands already.

Ok, enough about Spiel and here’s my review of Raccoon Tycoon. Raccoon is a fast economic game where you have to buy and sell commodities (6 types of goods), collect commodities to buy towns, railroads or building.

When you open the box, there’s a lot of stuff in the box. As I mention earlier, there are 6 types of commodities, 4 different types of cards (railroad card, town cards, price/ production cards and mission cards), building tiles and money! I can hear you thinking, money?? Hopefully not like Monopoly, that’s right, definitely not like Monopoly money. They’ve done a great think with the money bills, it feels very steady and not just some cheap ass paper money I think you can play a lot of times with it and that’s how we like it. In the box there’s also a nice board, not too big and last there’s a first player token and that token is a big token J! 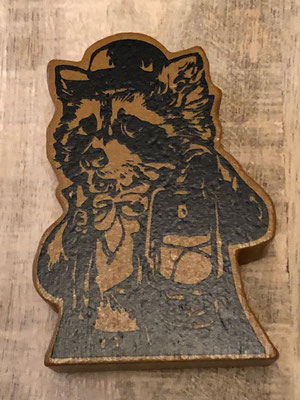 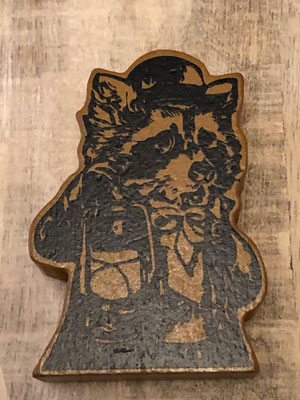 Price & Production Cards: Production to get 3 commodities on the card (4 or 5 when you’ve got a Cottage Industry card or a Factory building)
RailRoad Cards: you can only get them when you start an auction and this win this one.
Town Cards: you can ‘buy’ these cards with the commodities that are shown on the card
Building cards: for upgrades, a few examples like get $1 for every auction that has been started, produce up to 5 commodities or build Towns (get Town Cards) with 1 less commodity

Mission Cards: with these cards you can get extra points at the end of the game (you don’t show them to the other players. This last one is a stretch goal from the Kickstarter Campaign, I don’t know if it’s also available in the retail box.

It’s a game for 2-5 players with a play time around 90 minutes. 90 minutes and a fast game? How’s that? That’s simple, the game plays fast but you continue to play till all of the RailRoad Cards or the Town card Decks are empty. In the meantime you’ve got to collect as many cards, commodities and many to score a lot of points.

2. Sell commodities and gain money (price X units) and reduce the price by the amount of sold commodities

3. RailRoad auction, bid for one of the 2 available RailRoad Cards. The player that starts the auction may take another action if he loses the auction.
Note: you can’t bid higher than the amount of money you got.

The game ends when either the Town Deck or the RailRoad Deck is empty (when the last card has been taken from the board).

We’ve really enjoyed playing this game, it’s really a fast and fun game. The gameplay isn’t that difficult and is well explained in the rulebook. It’s definitely is light game that everyone can play & learn. This is really a game that should be in every house. We liked playing it because you can choose a lot of actions and you really have perform all of them, there isn’t one way to win the game. You can choose to get a lot of goods but there’s a limit of the amount of commodities you can store (10 commodities at any time), you can raise this by 1 for each building you one. So you also have to sell those commodities to buy building or to start an auction for a RailRoad card.

The RailRoad cards give you extra points at the end of the game but if you can make a pair with a Town card you get some extra points (are shown on the Town card).

We changed a little on the rule for the auction, we continued bidding till one of us passed on it. That made it for us a bit more fun, besides we’ve really enjoyed everything. The commodities are great and you can recognize every commoditie (wheat, wood, coal, iron, goods and luxury). The Town and RailRoad cards are awesome designed, this upgraded the game a lot. I really like Big Bear RailRoad cards. They’ve also did a great thing with the money, I already mentioned this earlier in my review but it’s really good money so you can play it a lot of times. This is really a game that we are going to play a lot of times. 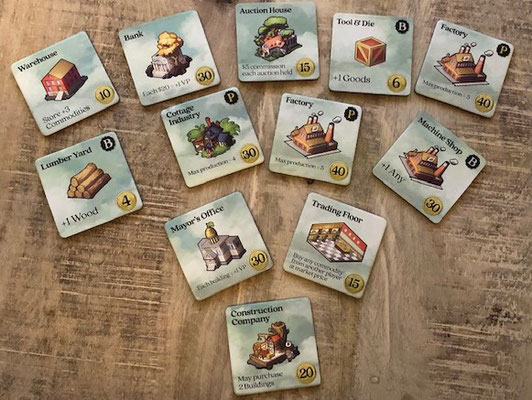 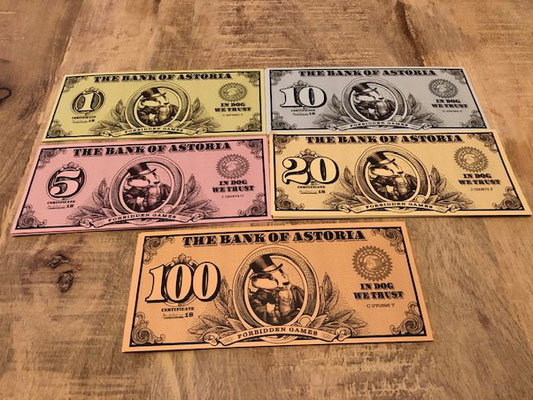 A game for 2-5 player
Play time around 90 minutes

Raccoon Tycoon is a light economic game that you can play with everyone. The components in the game are very solid and an amazing design that really has upgraded the game and made it really fun to play also for the younger ones. You can upgrade the metal coins instead of using the money that comes with the game. But if I have to say something I think that should be better, then it’s a small thing and that’s the insert of the box. I got a few problems of getting everything in the box but that could also be my own problem ;-).
The game is available for resale, hopefully soon also in the Netherlands!

Want to know more about the games from Forbidden Games? Then just visit http://www.forbiddengames.net.