Guardians of Xobos is a strategy game that has been inspired by the classic Real Time Strategy games. Each player owns an army with 4 Guardians and 9 Quarks to lead them to victory in 15 rounds.

In this game you have to collect as many Energy Crystals as possible. To collect these Energy Crystals you have to build Technology buildings, Energy Well and Mines. But it’s not only about collecting them. First of all I would like to thank Jaroslaw and Imagine Realm for letting me reviewing Guardians of Xobos. I have to say that everything you  see and I’ve played with are not the final components, this is still a review copy!

This game is now on live on Kickstarter à https://www.kickstarter.com/projects/imaginerealm/guardians-of-xobos

In this box you’ll find a lot of components. The thing I really have to say that is about the Guardians and Quarks, they are really awesome and very well detailed. Besides that, you’ll find a double printed board, for 2 and 4 players and the other side for 3 players what I think is a nice option in this game because it change the game a bit. 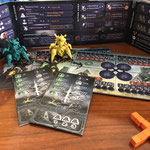 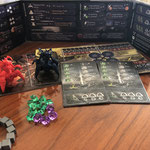 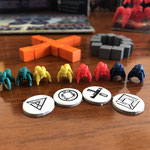 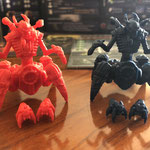 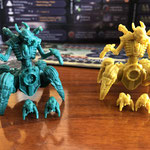 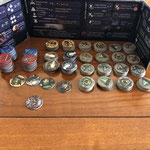 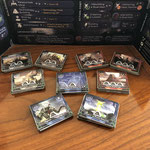 The setup of this game is not really difficult, but it takes some time because you have to sort all the tokens (144 tokens) and place them around the board. Place the Energy Crystals and the building resources next to the board, sort the Technology Tiles and place them next to the board. When you've all done this, you can start with your player board (make sure you also place the hiding screen to hide your player board). Place the Guardian icons on all of your 4 Guardians. Place 8 orange markers on you player sheet, 2 on each of the 4 Guardians, place one marker on the red bar (Hit) and one marker on the blue bar (Power). Every Guardian start with 6 Hit points en 1 Power, but only 1 Guardian starts with 2 Power. The Guardian with 2 Power is your Leader.

Then place the production Sheet next to your player board.

The game has 15 rounds, every round got a movement phase and a development phase.
In a movement phase you can choose to:
- move your units,
- destroy and seize buildings or
- declare attacks to one or more opponents.

In a development phase you can:
- Produce,
- Connect guardians,
- Construct buildings,
- Build units (breeding Quarks or rebuild a destroyed Guardian),
- Purchase technology,
- Upgrade a Guardian or
- Arming a watchtower

The player with the most Victory Points is the winner of this game. 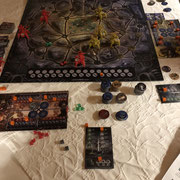 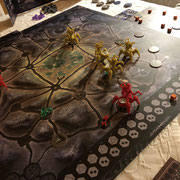 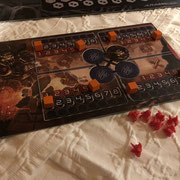 
I enjoyed playing this game, in the beginning we’ve had some struggle but after reading the rulebook and playing it a couple of times we understood everything. There are a few minors in the rulebook, but I’ve given those back to Jaroslaw Bilinski. What I really liked about the game, is that you don’t see what the other player is going to do or how strong or weak his Guardians are. That’s of course because you’re hiding it for each other but also when you’re building something, the other player(s) only get to see it when the building has been finished. I enjoyed this idea, so the other players don’t know what you’re building but also not how strong your opponents Guardians are. Because of the hiding actions and the change of the map (with more or fewer players) it’s got a high replayability.


The graphics and the minis really look great! The Guardians are really nice seized, maybe a bit oversized but not for me! Guardians of Xobos is really an original strategy game where you have to be strategic and you cannot win with luck. Just back Guardians of Xobos and bring this game to your table!