The world is under attack by Zentraedi fighters, are you choosing the right Heroes to destroy enough Zentraedi and become victorious? 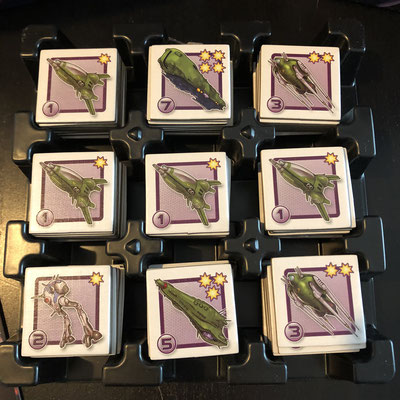 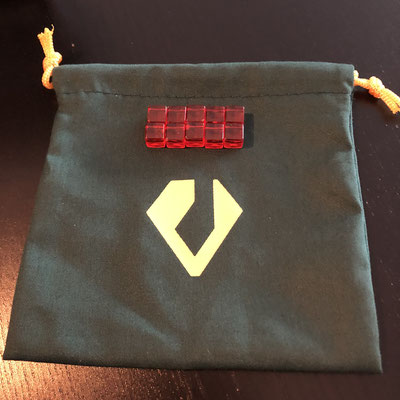 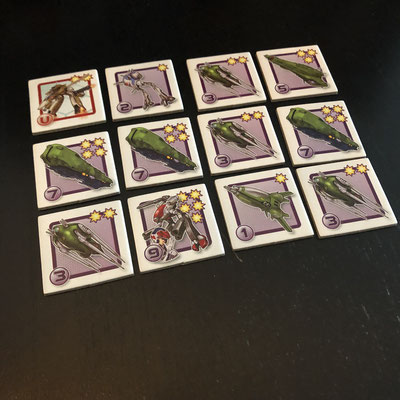 So you’re not using all of the tokens? That’s right, some of the tokens remain in the box and that’s why you have to pick them blind out of the bag. When you got all of the tokens in the bag, then you can start filling the Tray with 7 or 8 token in each Tray cell facing down. You place the last token face up so every player can see all of the 9 tokens face up.

Then shuffle the 8 upgrade tokens and place them face down, next to the Tray. And place the 8 Heroes face up on the table. When this has been done, you’re all set to go. The Zentraedi tokens does have numbers on it, that are the number of hits for destroying that Zentraedi fighter.

Every player gets to roll the 5 dices a total of 3 times (reroll max 2), so after the first roll you can choose to buy 1 or 2 Heroes (not more than a max of 2 heroes each turn) or choose to reroll. After choosing your heroes, you can start destroying the Zentraedi. When you’ve killed Zentraedi, pick the destroyed token from the tray and place them in front of you. Don’t turn over the tokens that are faced down, you only turn them over when the next player start his turn.

When you kill a Zentraedi token with the U sign, then you can pick-up an upgrade card from the pile. This upgrade card can give you extra points at the end of the game or a very nice upgrade that you can use once per turn. When you’ve used it, you turn it over till your turn ends.


The game ends when in 1 Tray cell all the Zentraedi fighters are destroyed. 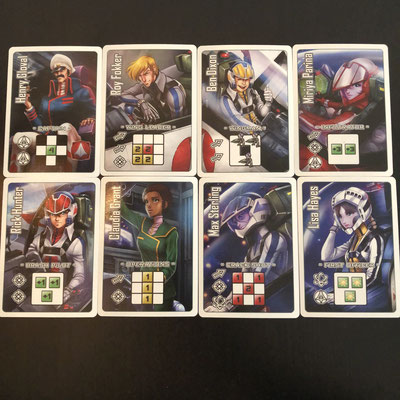 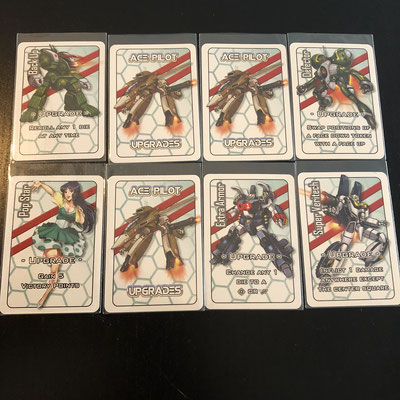 I’ve never heard before about Robotech, but it really looks like a very nice tv-show that I missed during my childhood :(. Mostly all of my friends also missed this one but we had really fun by playing this game. So in the beginning we had to dig into the rulebook to know what all the heroes could do for action but after a few games we understood it all. Robotech: Ace Pilot is a really nice and quick game and I really liked it that you have to use the dice to choose a hero. Sometimes you could only pick one hero because I didn’t had the right dice to ‘buy’ another hero. Because of the theme, it’s really a game that we’re going to play a lot more! It’s a great starter for a long game night.

See the website for more information about Robotech Games from Japanime Games: https://japanimegames.com/pages/robotech-resources