This beautiful box, got the following components in it:

1 Point the finger board

Yes, I can imagine what you think… Are all of those components in this box? Yes, it all fits in this nice box. So let’s get it to the table. 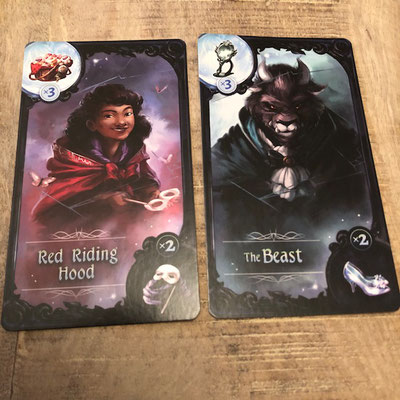 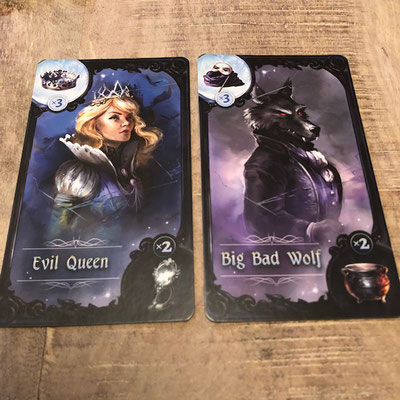 
If it’s your first play then I would recommend to play the standard Masquerade.

First place the game board in the center of the table. Place all of the components next to the gameboard. Each player choses a single color and take all the seven Evidence markers of that color and also pick a Player Aid card.

Then shuffle the Character, Artifact and Action cards (remove Peek at the Guest List, Start the Dance and Secrets from this deck before shuffling) and make separate decks. Deal one face-down Character card to each player (or 2 in a 2-player game). Do not show your character card to the other player(s).

Reveal Artifact cards equal to the number of players plus two. Example: if you have 3 players, reveal 5 Artifact cards. Each player choses 1 Artifact card and places it face-up in front of them. If you’re playing a 2-player game, then reveal 6 cards and each player takes 2. The artifact cards that aren’t chosen are placed next to the Artifact deck, this is your discard pile.


Place the 3 Rose Trophies next to the board en place the lowest Rose Trophie on the top. The 3 Trophies shows the 3 rounds of the game but also give that amount of Roses to the player that won that round.

The goal of the game is to Unmask the other player with 2 matching Bane Artifacts or to collect 3 matching Boone Artifacts.

1.  Draw Artifacts
Draw one Artifact card from the deck and choose to keep it or

To give it to another player. Then draw a second card and do the

opposite of what you chose for the first card.

This is optional. You can perform an optional Action after you draw the 2 Artifact cards. But you can only do this action when you got a pair of matching Artifacts. Each round you got 3 options available to choose from. But the action Point the Finger is always available.
Each round, two new Actions cards are revealed from a possible set of six (or 4 in a 2-player game, the last round you shuffle the 4 cards).
Action card Point the Finger: When you guess correct and unmasks that player and scores you a total of two Roses, but an incorrect guess scores a Rose for the wrongly accused.


You got 2 matching Artifacts:
When you got 2 matching Artifacts you must immediately reveal information about your Character. There are 2 options
1. You are unmasked, you must reveal your secret identity and then you’ve lost this round;
When you are unmasked, you must immediately place the Broken Mirror marker on your Character. You can no longer win this round by gathering three of your Boon Artifacts.

2. You aren’t unmasked, then you put an Evidence marker on the character whose Bane it is.

You got 3 matching Artifacts:
You won this round if it’s your Character’s Boon Artifact, just reveal your identity and gain that round’s Rose Trophy.

After this round, you reset everything and start the next round like you started the first round.


2 examples of a Character card, on the left-top


3 examples of Action cards, on the left and

right you see the Action cards that are

different every round. In the middle you see the

action Point the Finger. This action is always


We’ve really enjoyed playing this game. The theme itself is already a very nice theme but also trying to fool each other makes it even more fun. It’s a fast and fun game that we will certainly play a lot. It’s a very fun and fast game, you choose the card that you want to keep or not, but you also have to watch to the other Artifact cards from the other players. But be aware; they can also fool you by collecting other Artifacts to perform an Action. We’ve played this game a couple of times and we really loved it, because each round you can always fool each other, but you can also ensure that you have 3 identical artifact cards quickly.

If you are looking for a new, fun and fast game with a fairytale theme then this is definitely recommended! In addition to being fast, this game is also incredibly fast to learn and get on the table. But if you’re looking for a heavy game then play this game with the Advanced Masquerade!

The games that I have played from these publishers are always of very good quality. In this game all components are again of excellent quality, nice cards, thick quality tokens and broken mirror markers. Besides the quality, the artwork is very great! I really like the artwork from Tim Eisner.


I want to thank Skybound Games and Druid City Games for letting me review this game! If you're interested in this game, just go to their website and order this game!