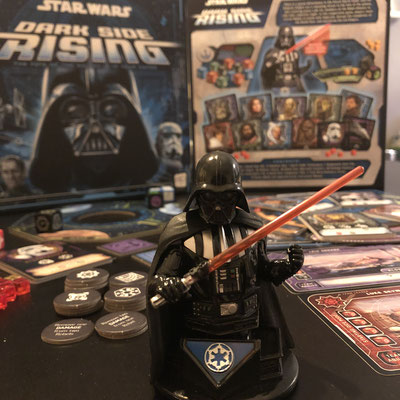 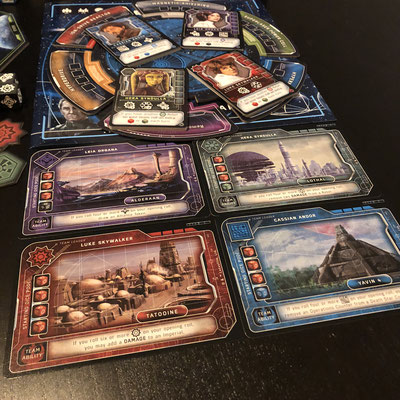 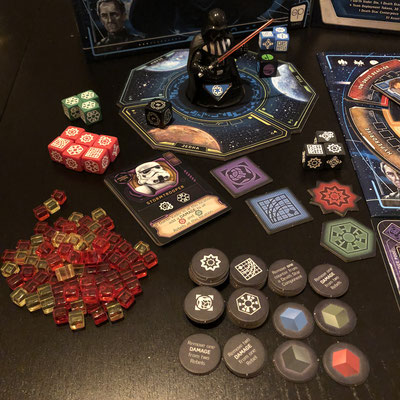 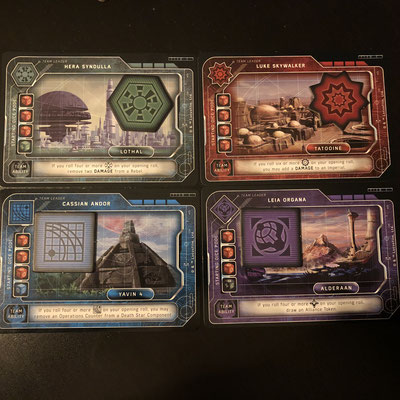 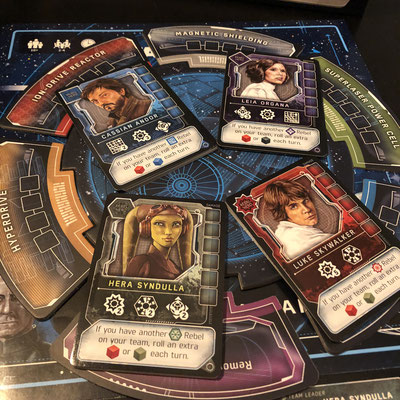 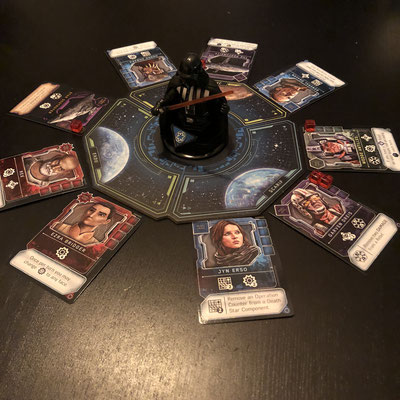 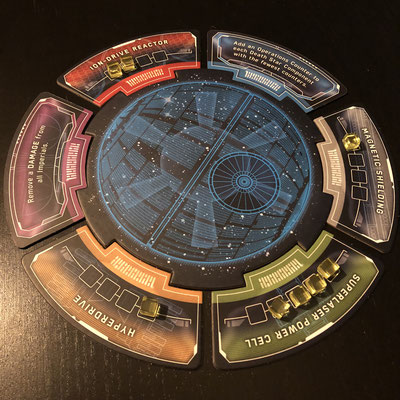 
Each player first chooses a Team Base Card with the starting Rebel and with the matching token. Then collect the starting dice, that you see on the base card.

When everything is ready, then you deal out 9 of the Asset Cards, 3 on each of the location.

2.    Roll and Resolve the Dark Side Die (Death Star and Darth Vader). First roll the Death Star Die and make the Death Star fully operational. Place a Death Star Component Tiles matching the color of the die roll. If the Death Star component’s completion track if filled, it cannot receive any more counters. At the end of the turn it will be turned over and become operational.

Darth Vader’s Helmet; Darth Vader activates the abilities of all Imperials NOT only at his current sector. First activate the Imperials in the current location and then clockwise in the other sectors.

The active player roll the Dice and assign at least one die to a Rebel or to an Imperial. If you cannot assign a die, you must  select a die and unassigned it from the dice pool.


There are 4 different symbols (traits); Tactical, Intelligence, Support and Leadership. Each color die is strong in one of the traits, some of them include a double symbol (counts as 2 of that symbol).

If you got all the dice that are shown on the Asset card, you can recruit the Rebel or add a Damage Counter to an Imperial.

The Dark Side Die, on the left you see the

Death Star and  on the right the Darth Vader.


The 4 different type of dice, each of them also got a symbol that counds for 2 symbols.

Game ends
There’s only one way to win and that’s to defeat at least 7 Imperials, when you’ve played it more often you can increase this number to defeat more Imperials. But you have to agree this before you start playing.

You’re defeated when:
- When the Dead Stare is completed and when all the components are turned over
- When there are 10 or more Rebels defeated
- If anyone player has all of his Rebels are defeated


6 examples of Rebel Cards, below the picture of this

Rebel you see what type of combinations you need to

You also see an ability what kind of action this Imperial card does when Darth Vader is on this location.


It is a very nice game but certainly a difficult game. The challenge is really to strengthen your own base team as quickly as possible by recruiting Rebels. But also as soon as there is a Imperial card on the table, to beat it as quickly as possible. we have won just once in a while, but losing is also a possibility. Before you know it, the Death Star is complete and you have lost.

For example in our first game, we’ve defeated in the beginning 5 Imperials but then it took a while before the next Imperial popped up on the table so Dark Vader had enough time to destroy a lot of our Rebels. But just in time 2 Imperials were placed on the table and we nearly defeated them and won our first game. It’s really a game that you can play often because you can choose a new Base team but also you can choose your own Rebels for in your team and sometimes you can make it a bit harder by choosing for the stronger Rebels which can be tricky if you don't have enough dice.

This game is only available in European, Middle Eastern and African (EMEA) countries.

What I really like?
- Very great quality of the components
- nice artwork, you can also combine the different Star Wars Rebels
- very interesting gameplay


What could be better?
I found it very difficult to say something that could be better, but if I had to name 2 points for improvement, then it would be:
- I would prefer a better inlay for the components
- More Imperials so you can also make it more difficult by choosing for stronger Rebels instead of just more Rebels.

I want to thank Ross Thompson from The OP Games Usaopoly for letting me review this game! Take a look at their website for more awesome games!

There are no comments yet.