This box, got the following components in it: 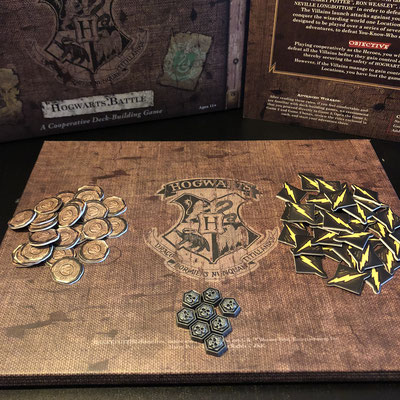 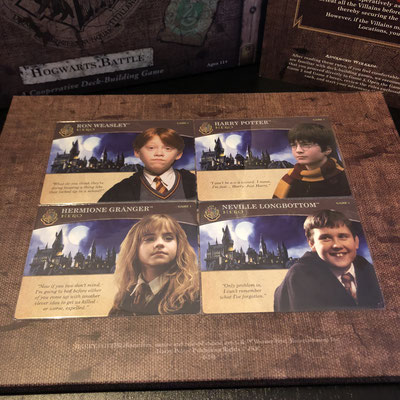 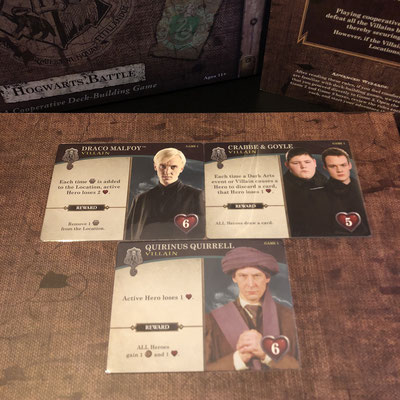 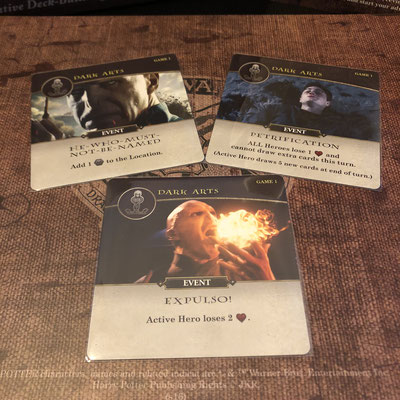 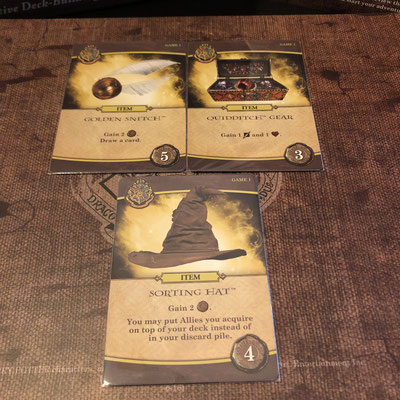 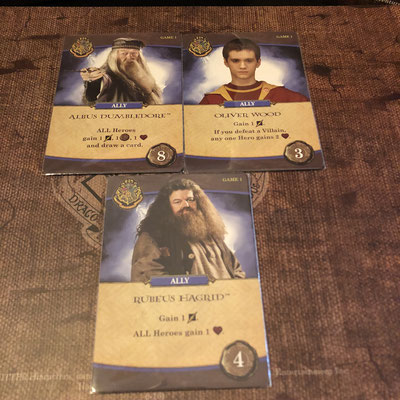 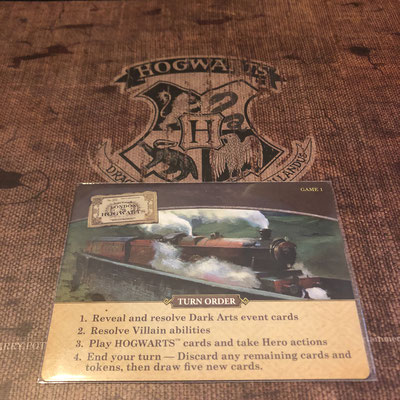 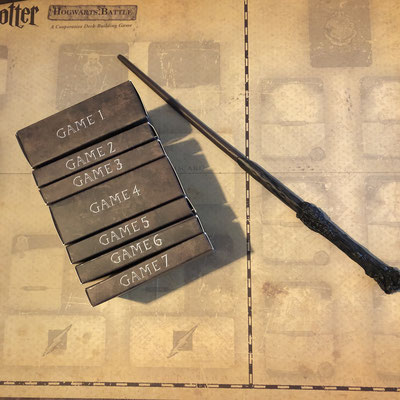 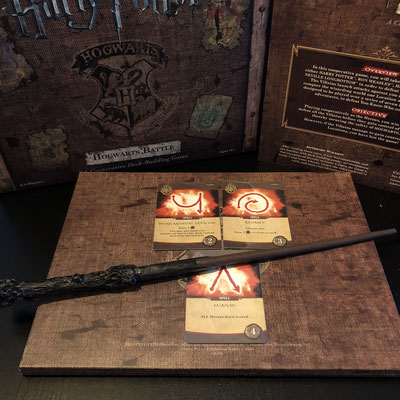 
This review does NOT contain spoilers!! I've sleeved all of the cards, so they can be a bit shiny.


Place the game board in the middle of the table so all of the player can reach and see everything on the board. All players also get a player board (if you’re playing solo, you have to play with at least 2 Hero’s)

For the first game, open box number 1, shuffle all the Hogwarts cards and place them on the right side of the board. Place 6 cards from the deck on the appropriate place on the game board.


All the player choose a hero to play with (minimum of 2 Hero’s if you’re playing solo). The four heroes in this game are Ron, Hermione, Neville and Harry (of course). Every player picks 5 cards from his deck, just hide it from the other players. It’s a cooperative game, so you can choose to play open hands or discuss with all the other players what to do or which Villains you're going to attack.

When the first player starts the game, that player turns a Dark Arts card and resolve the effect on that card, for example you have to add one token on the Location card (see end of the game what it does with a location) or the active player loses 2 health (on his health track). After the Dark Art card has been resolved, that player is going to play his 5 cards.


The active player and take the action on the cards, for example you can get a few coins or power to defeat the active Villain. When you’ve bought something from the market, that card goes directly to your discard pile (or to your main deck when you’ve played a card with that specific effect). If you do not have enough money to buy something or you have money left after buying, this goes back to the table.

When the next player starts playing, that player turn on a new Dark Art card and resolve the effect on that card and then he starts playing his 5 cards from his hand. This continues till the end of the game.

An example of 3 Spell cards, on the bottom right you see the amount of money you need to buy it from the market. In the middel you see what the Spell does for example "Gain 2 coins or draw a card" or All "Heroes draw a card".


Here's an example when an Villain Control Token has been placed on the location card. When this card is full with tokens, it has been occupied by the Villains. Place this card on the side and turn the next location card faced up and continue this game. When all cards have been occupied  you loos the game.

Each of the 7 games ends when you’ve beaten all the Villains in that game. The further you get to game number 7 the more Villains will join your game with the Villains from the previous games so the more difficult it will be to beat all of those Villains.


Can you lose too? Of course! You lose once all locations are occupied by the Villains. If you lose a game, just start over by resetting everything and try again.

Here's an example of Hermiones deck as a starter. I've only added a discard card as an example (on the right of your player board) . In this example you also see that I've added the awards from my first hand, 4 coins and 1 lightning bolt.

On the top of my player board you also see my Hero and a turn order card with all the actions you have to perform.


When I'm ready, I now can buy something from the market with a total amount of 4 coins. And I use the lightning bolt agains a Villain. After all these actions, I'll place my cards on the discard pile and then I'll take 5 new cards from my deck. If you don't have 5 cards in your deck then you'll shuffle all the cards from the discard pile and create a new deck on te left.


I’m a huge fan of Harry Potter and that’s why I wanted to buy this game at Spiel. This is really a game for all the Harry Potter fans! I really like that they used the artwork from the movies. This makes everything very recognizable, yup no more fantasy thoughts, but that had already changed after the film. They've made everything very clear, when opening the first box you got all the cards together in a small bag. So the Dark Aert cards are together, the big cards together etc. Also when you get further in the game, the extra rules are very easy to read and to store in main Rulebook. So when you want to check something, you can find it back very quickly but it als doesn't spoiler anything for the other games.

It’s really a fun cooperative game, there is a lot of interaction with all the other players not only for discussing which Villain you’re going to attack but also to discuss which player you have to heal or which cards to buy. In the first game it's very difficult to buy some great cards, because you don't have the right amount of money. But when you're further in the game, you can get a enough money to buy the more expansive cards.

I really enjoyed playing solo with this game! I've also played it a couple of times with other players but mostly all of the games I’ve played Solo because I have a lot of muggle friends ;-). There's only one thing I really need and that's an active player token so that I do not forget which active hero I am playing with.

- I've mentioned a lot; You can play this game SOLO J

- Great quality of the components, game board and cards
- I like the artwork, they’ve used it from the movies


What could be better?
- I miss the option to get cards out of your deck that are a weak
- More heroes to play with
- An active player token for when you’re playing solo (so you can’t forget which hero is the active hero)

This is a great game from The OP Games Usaopoly! Take a look at their website for more awesome games!