Get ready to construct tracks, deliver goods
and collect the most Prestige points to win! 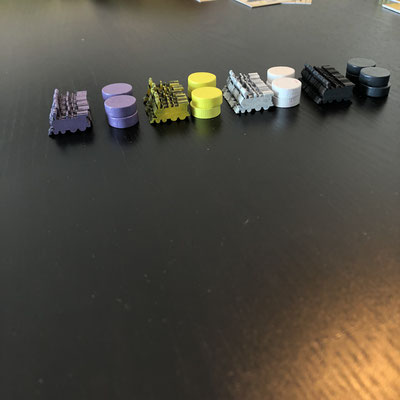 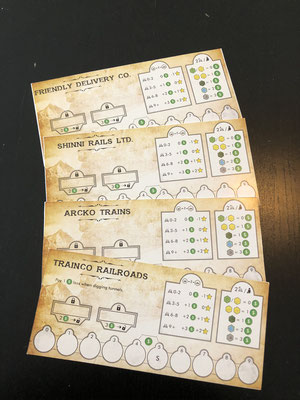 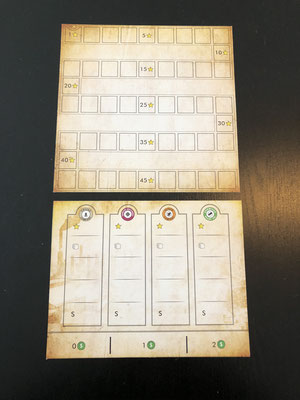 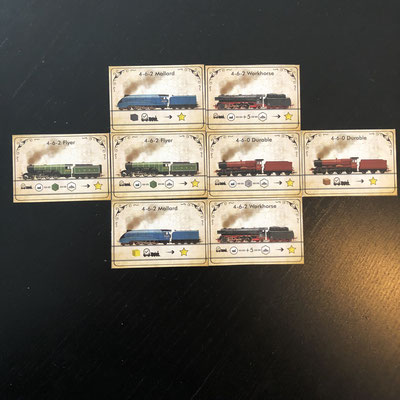 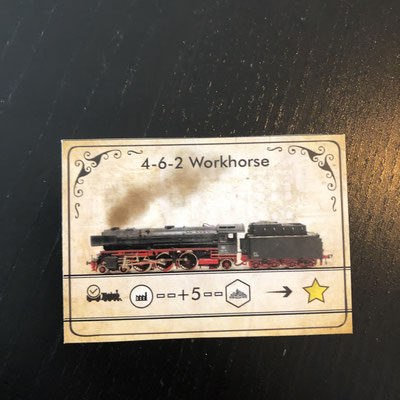 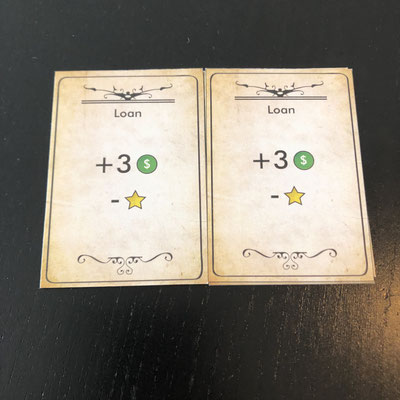 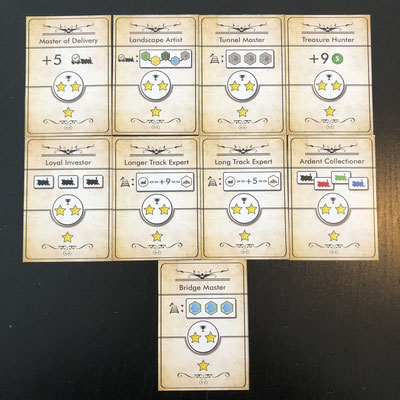 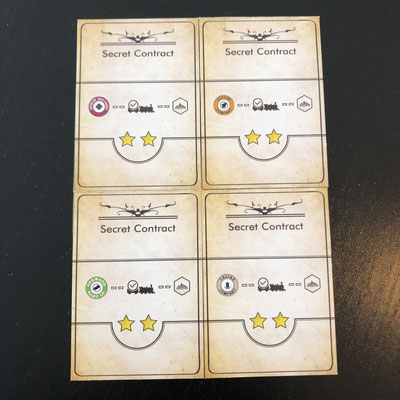 First you’re going to setup the map, Use the tiles to make a modular map of the country where you want to build your railroad empires

To construct the map, place each of the tiles in a way that the sizes with the most white dots sides on each tile touches another tile with white dots on the side. This is to get more better balanced map.

Shuffle the Achievement cards and choose 5 random  cards and place them near the board.

Set up the player board

Before we start playing, each player first place a train on a factory of his or her choice.

During your turn you can have 4 actions/ steps

At this step, you must place 2 tracks, for constructing your train network. Each track you place must be adjacent to one of your own train meeples and you cannot place a track where you already have one. While placing each track, you must pay the corresponding terrain costs. On your player board you see the amount of $ you have to pay in total for placing both trains. A total of two players can have a train on the same space.

- You don’t have to pay when you’re building a track on a factory or a city.
- If you are the first player that placed a track on a star you receive 1 Prestige point.

During your turn, you can also choose place a 3rd train by unlocking one of your trains on your player board. But you can do this when you’re not the first on the prestige track. You also have to pay the cost shown below the track ($2 for the first track, $3 for the second track).

You can start a new route by paying $2 extra and placing a track at a Factory where you don’t have a track. This train doesn’t have to be connected to your route network.

When constructing the tracks and your connecting a Factory with one or two goods that are present on the City you may send one good from that Factory to that City to make a delivery, it can be one or both! Additionally, your good may pass through your other Factories and Cities before it reaches the final destination but it must be able to travel through your own connected line in order to make the delivery.

Important rule: You can make one delivery per turn and you cannot make a delivery to a City if you already have a train meeple there.

1. Take the good from the Factory and discard it.

3. Replace the track on the final destination city with a train meeple to mark that you have made a delivery to this city.

5. Play a train card from your hand into your play area. If you have fulfilled that train card’s condition with your delivery you’ve just made, gain 1 bonus Prestige.

In this step, check to see if you are have completed any of the Achievements. If you have, you may complete it during this step. If you can achieve more than one then you must choose the one you like the most. When you’re the first to complete that Achievement, place a disk marker in the circle, if you’re not the first then place it on the bottom of the card.

The last action is optional, you can buy a train card if you got less then 3 cards into your hand from the market.

Note; If there are after refill 3 off the same train cards, shuffle them back into the train card deck and refill the market with 3 new cards. It’s also not possible to discard any train cards.

Some spaces on the Prestige Track will trigger the factories to produce their original goods. This happens when that space on the Prestige Track is reached for the first time by a player. When that happens, each factory that isn’t at full capacity (the same as it was on setup), add a good to that factory so it can produce.

Whenever you are unable to pay for something, you can take a Loan card. Loan cards immediately give you $3 but at the end of the game they subtract 1 prestige per each loan you have taken. Loans cannot be paid back.

Cities and their demand:

Cities do not keep the goods that you deliver to them. The goods icons on the city only represent which goods can be delivered to that city. After delivery you discard the goods.

The game ends when all of the players have placed their trains on the board. Players will now add up the Prestige points from the Achievement cards and the player with the most points is the winner!

Please not that everything you see, including the rules I’ve played are not final! They are already funded on Kickstarter but they really need your help to get more stretch goals getting funded. Small Railroad Empires is very fun game, the game and the components are already looking great! I really felt in love with the mini trains when I saw them for the first time and I can’t wait how they look in the final game.


About the gameplay itself, it’s a fun game that don’t take very long, you can play it between 30 and 60 minutes but it also depends with how much player you’re playing. The rules are very clear and it’s fun to take a look at your cards and see if you can get extra points for playing train cards or trying to be the first to achieve an achievement card or to be the first to get that special card for $ 0.

Many thanks to Milan Tasevski from Archona Games for giving me to opportunity to review this great train game! Go and see their campaign on Kickstarter.