Aan example of a Round card filled with all the components. Below you'll see how many Map TIles you have to put on the table. 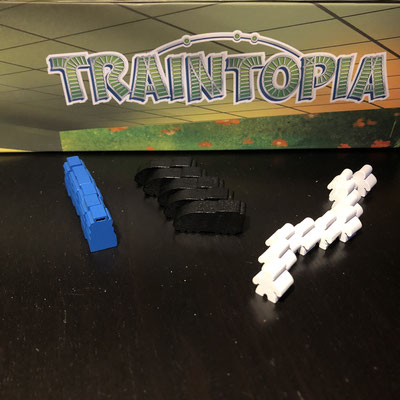 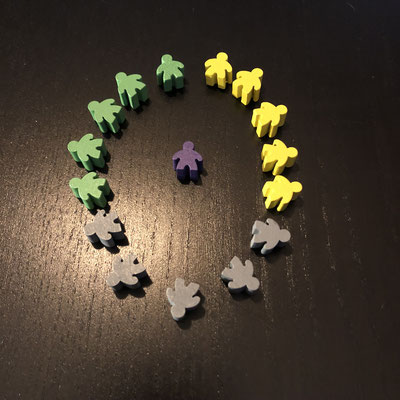 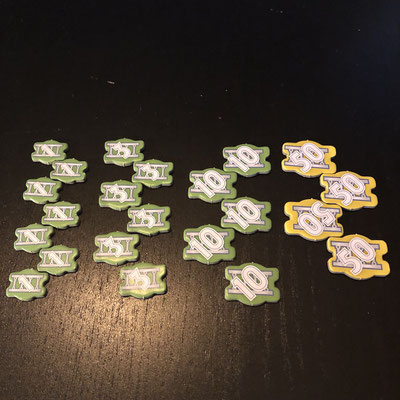 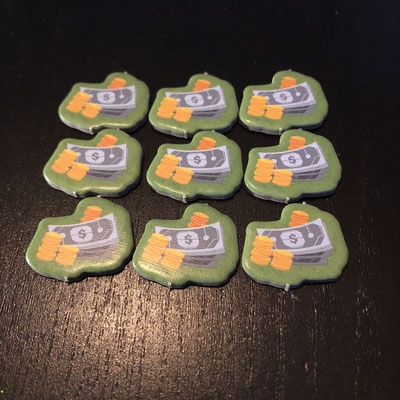 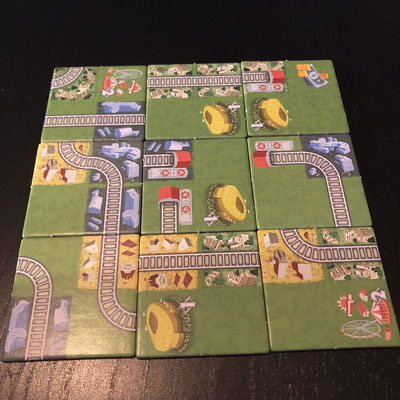 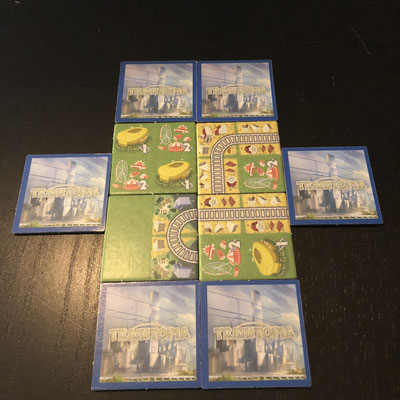 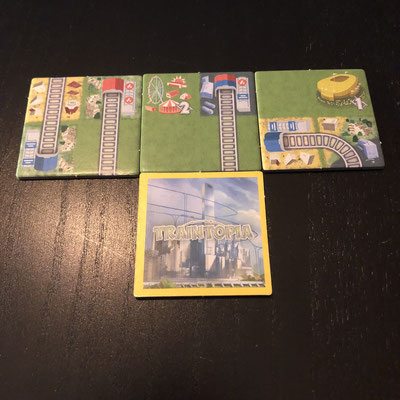 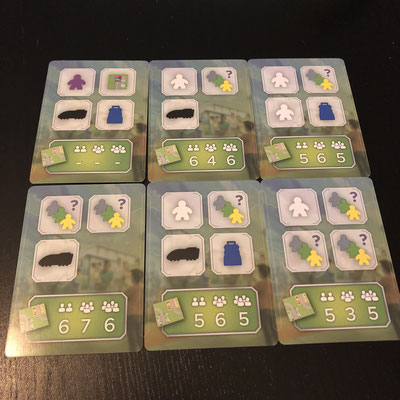 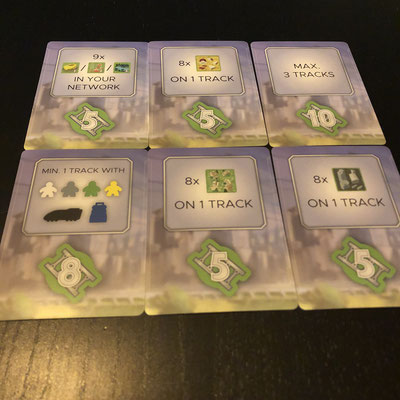 First shuffle the Map tiles and place them nearby, reveal a number of Map Tiles equal to the number of players times two, place the Bonus Tiles next to the playing area face up in a line. Shuffle the Round cards and create a deck, this one you place them face down in the middle of the playing area (When you play with 3 players you’ll use 9 cards and 8 cards when you play with 2 or 4 players).

Place the End Game Bonus Card face up near the Round Cards and put the Railway Inspector, Railhead Tile, a single train and one Mailbag on this card.

Place all the Money, Victory Tokens, Tourists, Trains and Mailbags in the different piles next to the side of the playing area. Put all the Commuters in the bag and give it to the player that receives the Player Aid Card with .the Conductor symbol

Shuffle the Objective cards and deal one to each player and place the rest on the table. You can buy (change) them later in the game. Give every player also a Player Aid Cards, the player with the Conductor symbol is the starting player. Every player also receives a Starting Tile.

All the rest can be placed back in the box.


Now the last player, the player that is sitting to the right of the player with the Conductor symbol card isgoing clockwise to choose one of the face-up Map Tiles, do this until every Map Tiles has been chosen. Then everyone add their Map Tiles to their starting Tile.

Now we are ready to play!

Each round has 3 parts, Preparation, Draft and Clean-Up, this continues till all the round cards have been played.

The starting player draws the top card of the Round deck and place it in the middle of the playing area. Then place all the wooden elements on the card. Then check on the bottom of the card how many Map Tiles you have to place next to this Round Card, this depends with how many players you’re playing.

After the preparation part, every player takes a turn and chooses something, for example a Commuter, Map Tile or something else. You place this in front of you and add it to your Network, you continue till there is just 1 item left. You can also discard an element to score 1 VP.

Placing the tracks onto you Network

You can place a Map Tile only next to another Map Tile when you can connect the rail to another rail. But you cannot create a loop, you always have a starting and ending train station.

When you place a Map Tile with a money token, then place also that token on the Map Tile.

You can place the different commuters on a track, but always 1 of each color! For every district type of district you score 1 point;

-The grey commuter can be placed on the grey district and on the mixed districts;

-The green commuter can be placed on the green district and on the mixed districts;

-The yellow commuter can be placed on the yellow district and on the mixed districts;

The Tourist can be place next to a track, it scores 1,2 or 3 points for each Landmark (stadium, circus or forest).

Mailbags and trains, they don’t score any points during the game but at the end of the game.

At any time during your turn you can spend up to 3 Money Tokens, each for a special actions.

- Change a Commuter color, so you can receive extra VP’s, you can change a yellow commuter into a green one.

- Draw an Objective card and change this with the other one. Place the other card on the bottom of the Objective deck.

When there is just one item left, the last part starts. You clean up to playing area, place the Round Card in the box and get everything ready for the next round. When there are no more Round Cards you can continue till the end of the game rules.

As I mentioned earlier, when the last Round Card has been played. The game ends, but before you score points, there’s an extra step you must take. Count all the victory points you’ve got:

The last player with the fewest points choses one of the bonus items from the End Game Bonus Card, till everyone has chosen their Bonuses. Everyone can add them now to their Network and now you’re ready to start counting the points.

Count all the money tokens that are in your Network and that are adjacent to a track with a train. Then receive points depending on the total Money Tokens from your Network.

In a 2 player game, 6 VP for the player with the longest track

Ties are broken by turn order, the one that’s closet to the last round starting player.

Do you like trains? Then this is really a game you should play! It’s not a difficult game, but it’s really fun and challenging. Why challenging? You really want to get a long track with some commuters on it, sometimes you also have to make a decision if you take that money token or not. The rules are explained very well in the rulebook, for example the explanation of the different Commodities are explained very well also with some examples. What I like is that you also got objective cards to score more points. Is it a though game? No not really, it’s an easy fun game. You can really play it when you don’t have much experience or when you just want to warm up for your board game night.

- a game that you can quickly start to play;

- I would prefer more cards, like more Objective Cards and/ or more Round Cards. So the game can be more different each time;

- When a train is chosen during each round, you will end up short of one.

Many thanks to Filip Glowacz from Board & Dice for giving me to opportunity to review this train game! Take a look at their website for more awesome games!