This wizard box, got the following components in it:

1 location board made of 3 interlocking pieces

6 Headquarter Cards (2 for each of the 3 affliction) 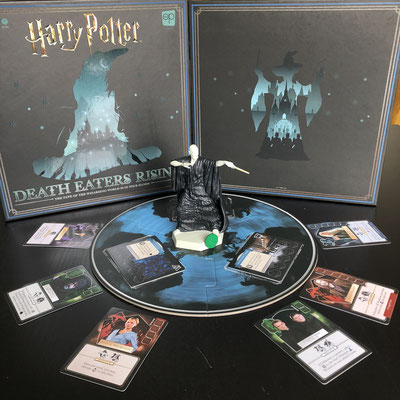 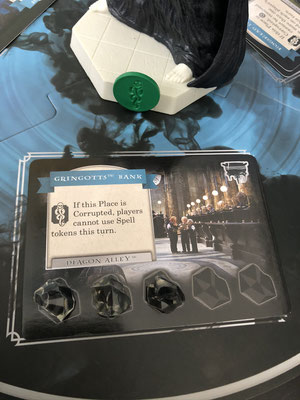 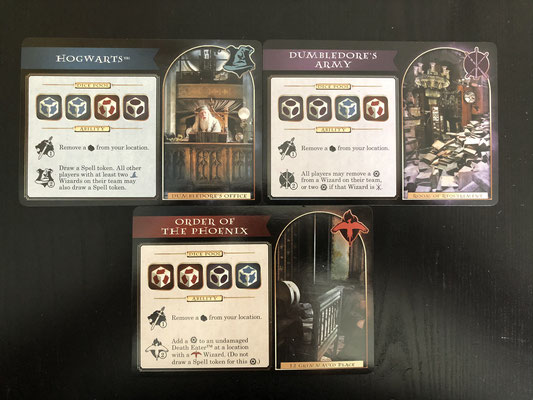 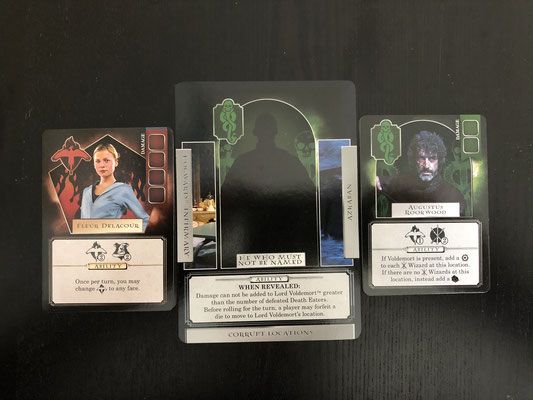 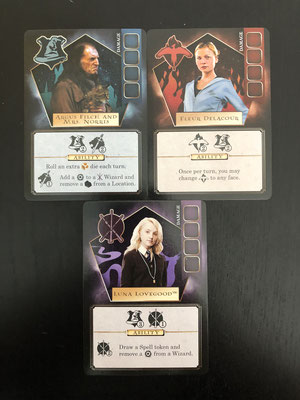 We start with setting up the game board.

First, each player chooses a headquarters (Hogwarts, Order of the Phoenix or Dumbledore's Army) this may and can be the same headquarters (there are only 3 different ones). Next you choose the corresponding character and mission token.


Connect the 3 locations and place Lord Voldemort in the center of the board.

Then place the location cards on the appropriate place on the board. You may do this randomly.
Put the Spell Tokens on the table so everyone can reach it, of course flipped over. Also place the Damage (red stones) and Corruption (black stones) counters near all players.

Shuffle all the character cards including the characters that have not been chosen and make 1 pile of them, before placing them on the table, place the card of Lord Voldemort in the middle of the pile of cards. Finally, at each location, place 3 cards face up from the pile of cards. Place the large card (Villain card) with Lord Voldemort on the table with space on both sides to place cards next to it.


You can put the dice on the table, anyone can use them and at the end of your turn you put them back together again.

1. Travel to a location.

1. Travel to a location; The active player chooses where to send his team to this mission, you place your Mission token on one of the 3 locations.

3. Roll and Assign and resolve Wizard dice; The active player collects all the dice he is allowed to play with. Look not only at the dice on your headquarter but also at the dice (if any) on your team's cards! After you've collected them, throw all the dice at the same time (the more the more fun the dice become).

After your throw, you can choose which card you want to go for in that specific location. This can be a Death Eater that you want to attack (this can be done once per turn per Death Eater) but you can also choose to expand your team. You must assign at least one die per roll, if this is not possible you must put a die aside.

Once you have rolled the required dice, you can choose to continue. Of course only if this is possible.

- If you have gone for a wizard, you can add him to your team.

- As a last possibility you may also have used a special ability at one of your wizards.

If one or more cards have been removed from the locations, you replace them with a new card from the deck of cards. There must always be 9 cards before it is a new player's turn!

4. End turn; Put all the dice back together, take your mission token and put it back at your headquarter.

After your done, the next player will start his or her turn.

Hermione has got 5 Damage counters, you still can resque her. But when the 6th Damage counters has been added then she's defeated. You don't want that to happen

There’s only one way to win and that’s to defeat Lord Voldemort, but before you can attack Lord Voldemort you first have to defeat at least 4 Death Eaters. But when you’ve played it more or when you want a more difficult game you can increase this number. But you have to agree this before you start playing.

- 4 (or more) places are corrupted

- Any one location is corrupted, so the 2 location cards and the base location itself (printed on the board).


Here you see an example how you have to place the wizards that has been defeated, corrupted locations and also the defeated Death Eaters around Lord Voldemort.

Just take a look at this awesome design on the cover of the box! You can see a lot in this box, is it just a Wizard's hat or see you also Harry Potter and Lord Voldemort in it?

Quality components: 8, components are really great! The cards feel very sturdy, Lord Voldemort looks scary but really great! The dice feel good and throw very nice, the quality will stay good for a long time because they are engraved.
Replayability: 7, this is definitely a game with a high replayability, every game will be different because you don't know what cards will be drawn. But you can also change the difficulty of the game.
My rating: 🎲🎲🎲🎲🎲🎲🎲🎲

About the game, as I said, it is a very nice game. Basically it is quite similar to Star Wars - Dark Side Rising but there are big differences! For example the different locations that can now be destroyed, fortunately there are plenty of locations available but it can be quite a challenge not to have too many locations destroyed.

- Very great quality of the components;
- Beautiful graphics, they have used pictures from the movies making it very recognizable who you play with or who you want to defeat;
- High replayability

- Different headquarters, you now have only 3, which makes it less fun to play with 4 players. With 4 players you will always have someone who has the same location.
- I want to play this one solo, it's coming so I'm waiting for this.


I want to thank Ross Thompson from The OP Games for letting me review this game! Take a look at their website for more awesome (Harry Potter) games!