The Court of Miracles

An overview of the different Rogue tokens that you can use and or draw during the game. In the Taverne you can draw new Rogue tokens. 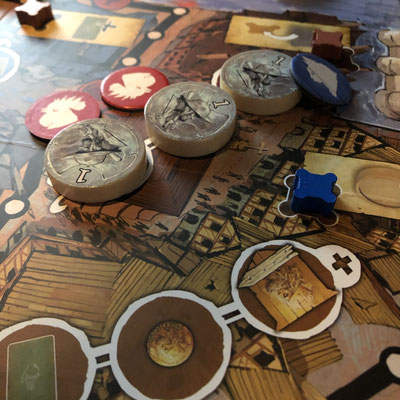 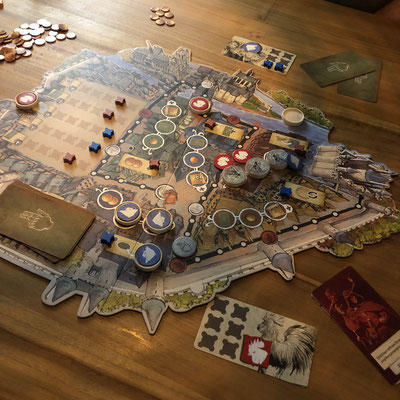 Place the board in the middle of the table. Then shuffle all the Plot cards and form a pile on the board, these are the cards with the 2 fingers. Place the Penniless King token at The Louvre, the castle, on the board. Make a pile of the coins and place this on the side of the board.

Each player then chooses a colour and chooses the corresponding player card, 6 Renown tokens and the 4 player tokens. Every player also receives 1 Plot card, 4 Rogue tokens (2 Henchmen, 1 Right-Hand and 1 Beggar). Then place the 4 Rogue tokens in the player tokens so the picture of the tokens is on the table, don’t show it to the other players! Look at your player tokens and place the one the fist, The Right-Hand token, on the board in the Renown Square (in the middle).

Each turn consists of the following actions;

- Take the effect on the spot where you place your token

- You can make use of the neighborhood action

Placing a Rogue token on the board, you can only place this on a free space in one off the neighborhoods. But beware, you have to place all the Rogue tokens next to the board first. Then you have to move them to another place on the board.

After placing your Rogue token on the board, take the appropriate action. This could be moving the Penniless King token 1 or 2 steps, taking a coin from the stock or choosing 1 or 2 Plot cards from the pile.

A standoff takes place at the end of a players turn. The standoff can take place when;

- all three spots in a neighborhood are occupied or

- when the Penniless King reaches a Wrath space on his path, this can be a red or a white one. The red Wrath active a Standoff in the neighborhood to which the hand is pointing, the white Wrath initiates a Standoff of that players choise.


How to settle a Standoff?
All players reveal their Rogue tokens, then they count the value of all of their tokens together. The player with the highest total wins this Standoff and take control of the neighborhood.

Finally, all players who participated in the Standoff take their Rogue tokens off the board and place them in front of them on the table.

You can always play a plot card, but only once per turn! You have to play this before the Standoff takes place. After playing you can place this besides the board on the discard pile.

Draw a new Rogue token from the bag, you can replace one of your tokens that aren’t in play (besides the board). When you choose to replace a token, you place the on that discarded into the river (the Seine). This token will not come back into play.

Pay the toll to place a Renown token on a space in the Renown Square and receive that bonus. You can only place one Renown token at one bonus.

Move 1 other Rogue token that’s already in play to any other free space on this board, this doesn’t trigger the effect of the spot! You can move the token from any player, including your own token.

take 2 coins for the reserver.

The Penniless King at his starting position, The Louvre. At the top right you see the first red wrath, as soon as the Penniless King comes here you start a Standoff in the neighbourhood in question.

The game can ends into 2 ways;

1; One of the players places his 6th and last Renown token on the board. The game then ends immediately or

2; The Penniless King reaches the last place on the board, i.e. at the gallows. Then the player with the most Renown tokens on the board wins the game.

A few examples of plot cards that you may use during the game. Please note, you may use them once per turn and always before any Standoff takes place.

Weight: 2/5
Replayability: 7, this is definitely a game with a high replayability, every game will be different because you don't know what cards will be drawn. But you can also change the difficulty of the game.
My rating: 🎲🎲🎲🎲🎲🎲🎲

Let’s get back to the 16th century Paris. Will you be the first player to place all of your 6 Renown tokens on the board?

Lucky Duck Games is known for great games and also the quality of the games and this is also reflected in The Court of Miracles. Everything is again of excellent quality, well written rulebooks and great games! I’m always very happy when I’ve got the possibility to play and review their games.

The board is really super fun designed and makes playing even more fun! The graphics on both the board and the cards are very nice done. The game is fun to play with 2 players but I still recommend to play the game with multiple players. That way you have more challenge, you can bother each other more instead of there being just a little too many free spaces to move to. With 2 players you will notice that there are less Standoffs than with more players, but we also got more different Rogue tokens in the game than with 2 players.

The actions on the spots and combined with the different neighborhood actions are very nice, you really want to be in a neighborhood with 2 Rogue tokens to be able to have more to win. More tokens in a neighborhood does not automatically mean you win because there are also stronger tokens with which you can win even if you only have 1 Rogue token in a standoff. Overall it's a very fun game for both the experienced and the novice player, we had a lot of fun and will definitely put the game back on the table.

What I really like?
- A very clear rulebook, the rules are explained very clear.
- Very great components, feel very solid and what the shape of this board. Really cool design!

What could be better?
- I am always glad to open a rulebook and see that they have used a pretty standard font. Sometimes, some rulebooks have fancy fonts and I find it a little difficult to read, but this is just a personal preference.

I want to thank Lucky Duck Games for letting me review this game! Take a look at their website for more awesome games and pre-order The Court of Miracles right now!