My review about some inserts from Folded Space.


The team from Folded Space bring you board game inserts that are affordable, lightweight and add improved game play and storage to your favourite games! They regularly add new inserts to their collection.

Quality: The quality of the foam sheets are great, in around 20 minutes your insert is completely ready to use them into your game box. But beware, make sure everything is properly dried. Their inserts are made from sheets of Evacore - a memory foam to which quality printed card is laminated to add rigidity. The great thing about these inserts is that they add almost nothing in terms of weight. Most inserts are only a few 100 grams extra and you don't really notice anything.


I used wood glue for this myself but you can also use standard hobby glue for this. The most important thing is that everything is secure. As soon as you push the necessary parts out of the sheets, you can start gluing them. I think the quality is really good. It feels sturdy and you can use it over and over again, e.g. some games you don't even need other trays anymore.

Instructions: The instructions that come with it are very clear, it says exactly which sheet you need which parts from to assemble the trays. But if for any reason you have lost them, they can all be found online on the website of Folded Space.


How to use it: These inserts are really made for the specific games you buy them for though. Of course you can put a tray in another box but because everything is made with care for the specific game you are buying this insert for. Precisely because it is for the game you buy it for it has a huge added value, I think, you can set up the game tremendously fast because of this.

The game components are together in the right trays. Some games have no insert at all or no suitable insert and I am really in favor of this type of insert.

My rating: an average of 8 out of 10 dice. In the small reviews about the at the specific insert you see the score per insert. The rating that I give has mainly to do with how useful the inserts are to me personally. The quality of the inserts are top notch, good weight and the box hardly gets heavier because of these inserts.

I want to thank Folded Space for letting me review these inserts and to let me use them for my games. If you're interested after seeing my review and pictures then go to their website and order these inserts!

This insert was made for Scythe and the Invaders from Afar expansion, Scythe one of my favorite games. I am really extremely happy with this insert, it makes it even more fun to put this game on the table. This insert took me a little more than 20 min. to make, but then again there are quite a few trays to assemble.

The only downside is that unfortunately not all the expansions (The Wind Gambit, The Rise of Fenris and the modular board),  fit in the normal box. That has nothing to do with this inlay but more with the size of the box, so you will really have to  buy the big box.

My rating: 9 if you just have the base game with some upgrades like the tokens, coins etc.. Then this is an insert I will definitely recommend. You can deploy Scythe on the table within minutes which means you can start playing quickly. Because of this, Scythe is and will always be one of my favorite games. 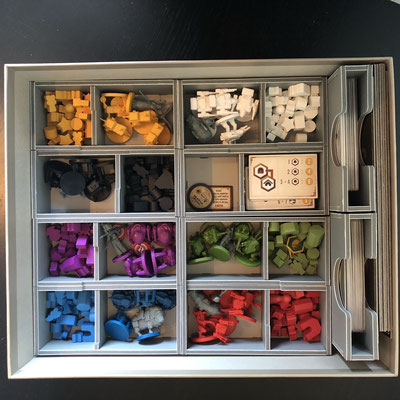 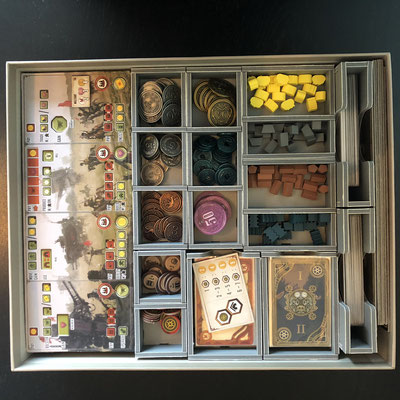 The trays for resources, they are big enough for these

resources but you can also replace them for

the realistic resources and they will fit also perfectly.

The trays for the coins, as you can see the metal coins

fit perfectly in these trays. You can leave everything

in them and place it directly on the table.

This insert was made for Everdell including all the Collector’s Edition content and the Pearlbrook, Bellfaire and Spirecrest expansions. Everdell one of my most beautiful games.

My rating: 8 If you only own the base game like I do, then this is not an insert that is going to help you set up the game tremendously faster. Just because of all the trays the game board and tree no longer fit in the box and you already need a 2nd box. If you have multiple expansions then this can certainly help, you then go from 4 boxes back to 2 boxes and yes you do have all the game components in 1 box.

Personally, I would not leave the parts such as berries, wood etc. in the boxes, they do not fit with the graphics of the game. I would therefore like to buy the expansion with the trays that do fit, unfortunately not available through Folded Space. 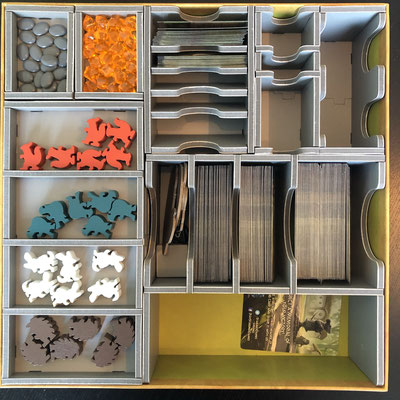 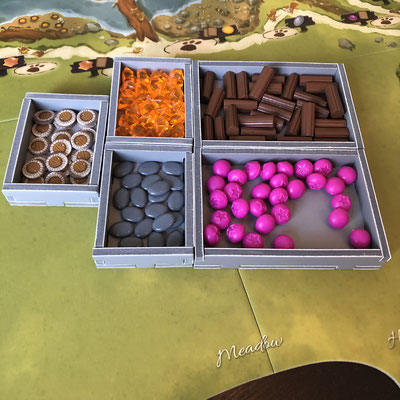 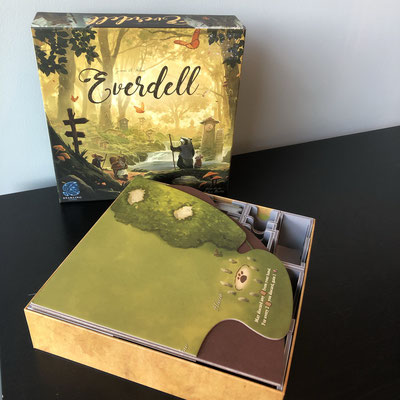 
This insert was made for King of New York or King of Tokyo, including the Power Up! and Halloween expansions, as well as the King Kong, Cthulhu, Anubis, and Cybertooth Monster Packs.

My rating: 7 This insert was originally made for King of Tokyo, which is why I also feel that some trays are redundant or mainly in preparation for expansions. As you can see, the boxes are rather empty, but everything else fits nicely in this box even with the game board included. I only doubt if this insert without expansions of the game, is an added value. Looking at just the insert and the goal, everything fits perfectly in the trays and in the box. 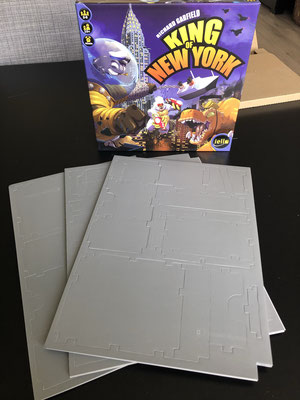 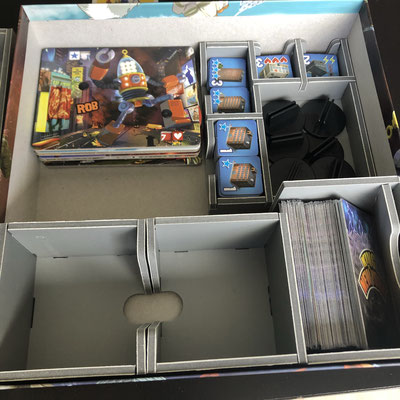 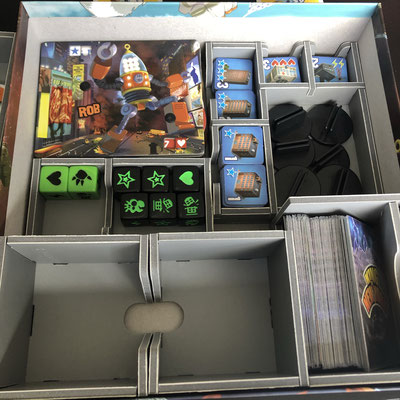 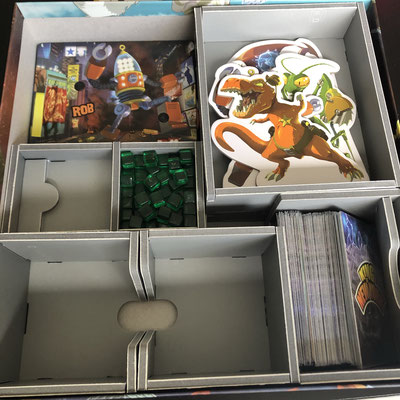