On the left you see the setup of the board for a 2 player game ( player vs player). I always place the VP (cups) on the board, this is not necessary but I think it looks cool.

Each player has 3 stages in their turn;

It is only possible to complete a Challenge at the beginning of your turn. An opponent will always try to prevent you from scoring VP's as soon as it's your turn.

Only at the beginning of the game, it will obviously not be possible to complete a Challenge!

2) Activation Phase
In this phase we are going to perform the fun actions, i.e. move or attack. How are you going to do that? The cards you have in your hand belong to a Champion, at the top left of the card is an icon that shows which Champion this card belongs to. If there is no icon, i.e. it is white, then it can be used by all 3 Champions. But these are defence cards and cannot be used during this phase.

You may not move through opponents or end up on the same spot as an opponent. On the other hand, you may move through Allies, but you may not end up into hexes that contain Allies. When moving, you can also move through a hex containing a Trap token. As soon as you land in a hex with a Trap token, regardless of whether you wanted to move further or not, you must perform the effect of the Trap token.

In this phase we are going to perform the fun actions, i.e. move or attack. How are you going to do that? The cards you have in your hand belong to a Champion, at the top left of the card is an icon that shows which Champion this card belongs to. If there is no icon, i.e. it is white, then it can be used by all 3 Champions. But these are defence cards and cannot be used during this phase.

You may not move through opponents or end up on the same spot as an opponent. On the other hand, you may move through an Allie, but you may not end up in an Allie. When moving, you can also move through a hex containing a Trap token. As soon as you land in a hex with a Trap token, regardless of whether you wanted to move further or not, you must perform the effect of the Trap token.

In Super Fantasy Brawl, you will also have to attack and defeat the opponent. Once you have defeated an opponent, you will receive a VP. Any action card with an attack icon is an attack card, but again, you can only use this card with the appropriate Champion. Once you start playing an action card, carry out the steps as follows;

1. Use the number of moves indicated on the card as much as possible.

3. Choose if you are going to use the attack. If you don't, then the action ends immediately.

4. Declare target(s) (the target has to be in range, some have a minimum and/ or a maximum range)

5. Opponent chooses whether to play a Reaction card

6. The target's defence value is subtracted from the current strength of the attack.

There are a few different attacks;
Melee attack; a melee attack targets a single adjacent Enemy.

Direct Shot: A direct shot targets a single Enemy, it works like an indirect shot but the target has to be in the same row of hexes as the Champion. Also this shot can’t be used to shoot through Statues and other Champions.

3) Upkeep Phase
During this Phase the players ready their Cores so that they are available during their opponent’s turn. This means that a player will always have all of their Cores available to play Reactions against their opponent’s Actions. But you have to use them carefully because the used Cores aren’t available on that player’s next turn.

When a Champion is defeated, it is immediately removed from the Arena. Note: not removed from the game, by the wizards it is healed again and moved to the Gate. If the out of action Champion was levelled up you have to flip their Champion card back to the basic side.

When you want to activate and out of action Champion, you have to use an Action card with a move action (boot), the first step is to move into the Arena.

During the game it’s possible that you see some keywords, in the Rulebook you can see the definition of these keywords.

3 Champions with their Champion card. Gwaien, Akhet and Tzu Xiao. 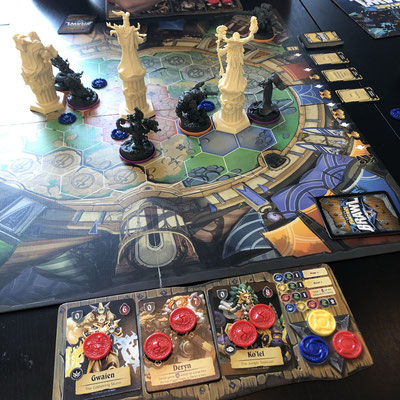 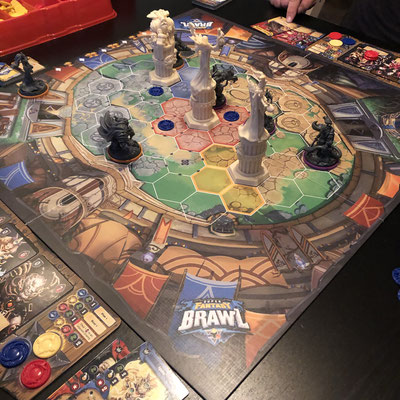 The winner of the game if the first player that reaches 5 VP. When a player wins his 5th trophy, the game ends immediately.

Here you can see everything back into the big boxes. As you can see it really looks great but they are really big.

Here you see the double sided cardboard tokens including the 4-player overlay. As you can see I didn't used these yet but I think I'm going to use some of them soon.

Set up of the game

Most of the time goes into picking the Champions and the corresponding cards. There are several options how you can divide the Champions, in the above explanation there are already a few examples but of course you are completely free in this. I think the most fun is to take all Champions out of the box and choose from them. In the beginning, this will not be a problem because you do not know what the strengths and weaknesses of a Champion are. If you have played the game many times, then you will remember them but even then you still have the choice to purchase additional Champions and add them to the 12 Champions. Picking the right cards does not have to be a lot of work but that depends on how you cleaned up the game the last time ;-). Anyway, it is advisable to check whether you have received the right number of cards per champion. After this you shuffle all the cards well and you have your starting deck ready to go.

Are there no areas for improvement? Yes there are, where setting up is done in no time, cleaning up the game is a bit more work. Of course it starts with cleaning up the cards and putting them together so you can start the next time. This is not a big problem because you can see from the card who it belongs to. But cleaning up the miniatures can be tricky. On the insert it is indicated who should be put where but this is not very clearly indicated and you should also know this. Otherwise you are busy to see which miniature can be put in which box. Once everything is in the separate boxes, you can quickly put everything back in the big box.

Quality of the components

The quality of the parts are just really super good! The miniatures are very sturdy and very nicely designed, the cards are very sturdy but I would recommend slewing them. Especially with the cards you use for your deck this can be very handy so they last longer.

The box and the board look nice and very cheerful, there is much use of light colors. This is in contrast to the action cards, which are slightly darker but that difference is very good because you use these cards to attack each other. The only downside to the inlays are the very large Champion miniatures, this already fills half the box and when you buy additional Champions they unfortunately can't be added. There is also an expansion where you replace the cardboard tokens with plastic tokens, these plastic tokens look very good and nice but unfortunately it is harder to see what is written on these tokens in contrast to the cardboard tokens. Personally, I'm not sure what I'm going to keep playing with, the plastic tokens do feel a lot nicer and are nicer than the cardboard tokens.

Overall impression of the game

Super Fantasy Brawl really surprised me after the first game and still does. After the first time we were so excited that we played a few more games. It is really fun to play, you have to have a little luck with the cards you get but that's part of the game. One time you get cards to play with all Champions, the next round you may only get cards for 1 or 2 Champions so you have to make other choices. When you are being attacked, you have to consider whether it is necessary or not, because you may want to use all 3 Cores and attack your opponent the next round. You will also have to look carefully at the Challenge cards to prevent your opponent from scoring 2 VP during his turn and maybe even ruining the game. Because of all these choices but also because you play with large miniatures, it really is a very nice game.

I want to thank Mythic Games for giving me the possibility to review Super Fantasy Brawl. Keep an eye on them, their going to launch a new awesome game soon on Kickstarter!