a shot of the inside of this little game box

Here you see a human player in action and he needs to kill that zombie with his gun. He can't use the sword because he's not in the same room as the zombie.

There is a zombie outbreak in the country, in the Echo Ridge Mall you and a few other people have escaped the outbreak and you are trying to survive. With the weapons loaded, good thinking and the occasional lucky headshot you have to try to make it to the targets in order to escape. If not, you end up already a delicious lunch for the zombies.

Overview of Tiny Epic Zombies, the game is played in a series of Turns performed by the Human players and after each turn, the Zombie player performs an action. This continues until the Humans or the Zombies has achieve their goal.


Human players goal; to win the game, the human players have to complete their 3 objective cards. If they do before the game ends, they win this game and have survived a life.

Zombie player’s ‘goal; Either to kill the humans and attack the Courtyard until no survivors remain OR to prevent the humans from completing their objectives until all the search cards have been revealed and they’ve taken their final turn. In the last case they’re overrun by zombies and the zombie payer has won the game.

Human turn;
Each turn you have the following 2 actions.
1. You must move 3 times, each move could consist one of the following actions
A: Kill 1 zombie; When moving into a room with a zombie, you can kill just 1 Zombie. Remove directly the zombie from the bord after you’ve killed him.
You can kill a zombie with a melee weapon or with a ranged attack. When you use a melee weapon, roll the melee die. You can roll the following results with the melee die:
Overkill: you can move directly 1 room for free, but take no actions in the room you’ve left.
Zombie skull: no additional effect
Take 1 damage
Take 2 damage

When you use a ranged weapon (ranged attack), with this attack you can only kill a zombie in an adjacent room (unless your character card says otherwise). To perform this attack pay 1 bullet on your player card.

B: Use the Room’s Ability and/ or interact with a Token
After moving into a room and only when the store is free of zombies, you can use the room abilities and/ or interact with the tokens.
Running ability; use this one immediately and continue your turn
Stopping ability; if you use this ability your turn ends in that room, but you still can reveal your search card as normal.
Secret passage; This room is considered adjacent with the other room that also has this token.
Pick up supplies; you may pick up a supply token from its room and place it onto your player card to carry it. After you return to the courtyard with the supply token you advance the barricade token 2 spaces on its track (maximum of 6). Then draw 1 card from the supply deck and collect this item instantly if you want, if not then you place it back in the supply deck and shuffle it again. Return the token to the starting place.
Objective tokens; see the objective cards for details on handling an objective token.

C: Collect items
When the store is free if zombies you can freely pick up any number of the faceup search cards that are beside the current store.
You can pick up weapons, place these on the bottom of your player card and insert the weapon onto your meeple. You only may hold 1 melee and 1 ranged weapon. During this action you can also swap weapons with the one in the store.

Pick backpack items, you place these on the right side of your player card. You can use these cards anytime during your turn and are discarded after use.

Pickup items, these are used as soon as they are picked up and then immediately discarded.

2. Search your current store
When your moved 3 times, it’s time to search the store. Flip over the facedown search card in front of you and place this card face up next to the store where you are. In another turn you can collect this card when it’s free from zombies. When you’re at the courtyard, you can place in any of the adjacent stores.

When this card is an event card, you immediately has to resolve this card.

During movement you must move into 1 an adjacent room. If a room is connected to another  with a flat wall they’re considered adjacent. This includes moving through walls inro rooms that are next to each other on an adjacent Mall card, even in the wall doesn’t have a door (you’re moving through destroyed parts of the wall).

Zombie turn;
When the human player has taken his turns, now it’s time for the zombie.
The zombie player has 3 steps to follow in his turn;
1. Check for noise;
Look at the card that just has been revealed, When this this card matches with the entrance of the store where that player’s meeple is in, that player has made some noise. If the card is matching, choose a zombie card and perform the action that is marked by the horde marker on that zombie card. After this is done, move that marker one space up.

When the card is not matching, that human isn’t making any noise. No more action for this step.

2. Add new zombies;
You can now add 2 zombies into one or both stores that match with the search card’s symbol. When you add a zombie to a store, each zombie must be placed on the lowest numbered room that doesn’t has a zombie in it. Only 1 zombie per single room.

When the whole store is full with zombies, place it in the nest store (adjacent) or into the courtyard.

3. Deal/ Draw search cards
Now you choose 1 search card from your hand and give that card to the player that just has revealed a search card. This player just place this card face down in front of him and may not look at this card.

If you give the last card from your hand to a player, you immediately draw 4 new search cards into your hand. If the search deck is empty, each human player take one more turn and the game ends.


After this zombie turn, it’s now time for the (next) human player.

End of the game
The game can ends when;

The zombie player can win when there are no more survivors in the courtyard and either a human player is eaten alive or the barricade token reaches “0”.

The zombie player can also win when all the cards in the search deck have been revealed and the human player haven’t completed their 3 objectives. 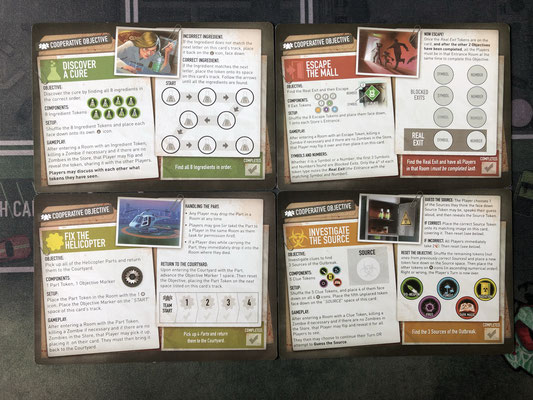 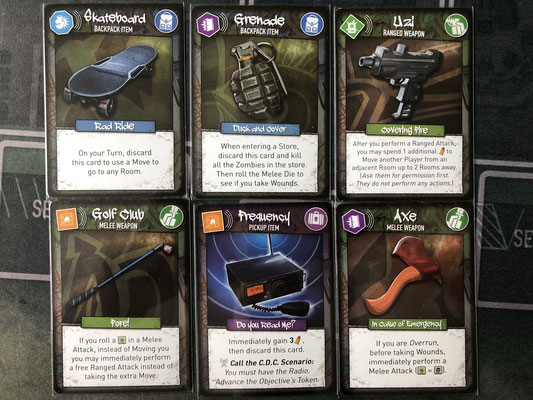 An example of a few mall cards, all cards are double sided. You can choose which side you play with

At the deluxe version of TIny Epic Zombie, you also get this tiny dog. He looks cute but he can also be a zombie dog and then you need to get the hell out!


Overall impression of the game

Take on the role of a zombie to dominate the mall or are you one of the few survivors who want to escape from the mall? I really like this game, but it is a hard game because you have to complete all 3 objectives before your cards run out in order to escape. But before that time you have to look in the various stores for different objective tokens, weapons to defeat the zombies etc.

The objectives are sometimes really difficult, instead of choosing 3 blindly, I recommend to search for them. Because some different combinations we found very difficult because you have to try to find many objectives with just a few cards.

For now we have only played against the AI zombie and not yet against the zombie player, this can make it fun but we still like this kind of coöperatieve games.

Tiny Epic Zombies is very much to our taste and we will certainly play it more often, also the solo variant is fun but also here quite tough!

I want to thank Gamelyn Games for giving me a review copy and giving me the possibility to review Tiny Epic Zombies.